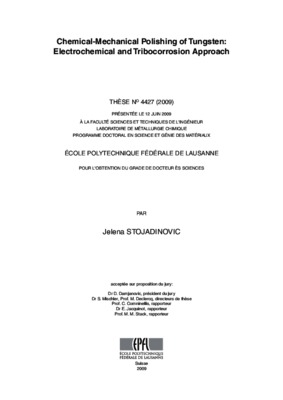 By Jelena Stojadinovic
Get PDF (43 MB)

The chemical-mechanical polishing process (CMP) is an essential part of the production of integrated circuits. Metal to be polished in the CMP reacts with the oxidants from the aqueous suspension (slurry) and the passive film is formed on the metal surface. Suspended abrasive nano particles from the slurry cause detachment of the formed friable passive films. The CMP represents the tribocorrosion process where material deterioration results from the interaction of wear and corrosion which takes place in tribological contact exposed to an aggressive environment. Due to increasing number of the materials to be polished in the modern integrated circuits it is necessary to gather fundamental understanding of the removal mechanism of each material. The aim of this work is to elucidate the removal mechanisms of tungsten (W), as a typical microelectronic metal (chosen as a model system), under different oxidising conditions (represented by electrochemically imposed potential). Also, we want to evaluate the effect of the slurry composition (chelating agents lactic and phosphoric acid) on material removal. To achieve this electrochemical techniques (chrono amperometry, cyclic voltametry, passivation kinetics measurements under mass transport control), and tribocorrosion techniques (tests on tribometer with electrochemical cell with reciprocating sliding motion of alumina ball) were used. Surface analysis techniques (SEM, XPS, AES) were used to assess worn and unworn surfaces' morphology and chemistry. In addition, electrochemical tests and polishing tests on the CMP machine were performed with technical CMP slurries. The sliding action of the alumina ball on tungsten in the 0.01 M H2SO4 solution was found to cause three distinct wear responses depending on imposed electrode potential. Below the first threshold potential the wear is low due to negligible oxide film formation. In the following wear region, up to the second threshold potential, materials deterioration in the rubbed area proceeds by cyclic mechanical removal of the WO3 passive film followed by repassivation of tungsten. The amount of anodic oxidation corresponds to the overall removed metal volume. Beyond the second threshold potential a compact tribolayer of WO3 (more than 400 nm thick), probably formed by agglomeration of oxide particles detached from the metal surface, forms and covers the wear track. Similar tribocorrosion behavior of tungsten was also observed in the presence of 0.1 M H3PO4. The presence of chelating agents, lactic acid and phosphoric acid, in the 0.01 M H2SO4 solution does not change the volume of material wastage at potentials below the second threshold potential. Beyond this electrode potential, lactic acid promotes WO3 dissolution and thus impedes the third body formation and enhances wear. Electrochemical factors have a strong influence on the tungsten CMP removal rate. It was found that CMP removal rate increases with the open circuit potential (electrode potential) and with passivation charge density. A good correlation of tribocorrosion results and CMP practice was observed. Tribocorrosion models can be successfully applied to the tribocorrosion of tungsten and as well can be fairly used for modelling the material removal in CMP