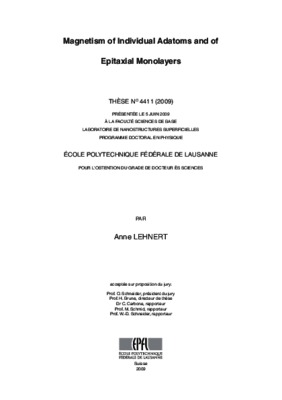 Magnetism of individual adatoms and of epitaxial monolayers

By Anne Lehnert
Get PDF (2 MB)

This thesis reports on the magnetism of low coordinated Fe and Co atoms in different chemical and electronic environments. The objective of this research was to contribute to the fundamental understanding of the magnetic properties, such as magneto-crystalline anisotropy energy (MAE), orbital and spin magnetic moment, of surface supported transition metal (TM) atoms and one atomic layer thick epitaxial TM films. A detailed knowledge on the interplay of electronic hybridization and magnetic properties is mandatory to elaborate new materials with high perpendicular magnetic anisotropy and acceptable writing field for future use in magnetic recording devices. The magnetic properties of the different experimental systems were investigated by x-ray absorption spectroscopy, x-ray magnetic circular dichroism, and magneto-optical Kerr effect (MOKE) and they were correlated to the morphology obtained by scanning tunneling microscopy (STM). The first part focuses on the effect of electronic hybridization between isolated 3d TM atoms and different kinds of substrates. First, we considered 4d and 5d TM substrates known for their high magnetic polarizability due to the close onset of ferromagnetism. Deposition of single Fe and Co atoms on Rh(111), Pd(111), and Pt(111) produces an increasing MAE going from Rh to Pd and finally to Pt that we directly correlate to the increasing spin-orbit constant of the substrate interlinking the induced magnetic moment and the MAE. Further we investigated single Fe and Co atoms on two different insulating layers, namely Al2O3/Ni3Al(111) and Cu2N/Cu(001), providing an efficient decoupling of the TM 3d states from the conduction electrons of the substrates. In case of the alumina film the absorption spectra of Fe and Co show a pronounced multiplet structure. On Cu2N the multiplet features of the adatoms are less defined due to the lower thickness of the screening layer. On both insulating layers we find a common out-of-plane easy axis, highly unquenched orbital moments, and giant MAE values of several meV/atom which are due to the formation of strong anisotropic bonds with the O and N atoms, respectively. The second part is dedicated to single atom thick layers of Fe and Co deposited on Pt(111) and Rh(111). We find the MAE to be strongly enhanced compared with bulk and we establish a direct proportionality between the induced magnetic moment of the topmost substrate layer and the MAE. The study of bimetallic Fe1-xCox alloys on platinum reveal a material with high MAE (0.5 meV at the equiatomic composition), large saturation magnetization (3μB to 2μB going from Fe to Co), and perpendicular magnetization easy axis. These characteristics hint at new possibilities for the further miniaturization of the grain size in recording devices. In the last part the theoretical description of the MOKE for ultra-thin films is extended to the transverse geometry and improved analytic formulae for the polar and longitudinal geometry are presented. This finding was used to optimize the Kerr signal for a new MOKE setup which is fully integrated in an ultrahigh vacuum chamber combining in situ MOKE and STM. The setup performance was demonstrated for a continuous film of 0.9 monolayers (ML) Co/Rh(111) with in-plane easy axis and for a superlattice of nanometric double layer Co islands on Au(11,12,12) with out-of-plane easy axis. The detection limit is 0.5 ML for transverse and 0.1 ML for polar Kerr geometry corresponding for island superlattices with the density of Co/Au(11,12,12) to islands composed of about 50 atoms. Moreover, the setup holds two independent ways to measure the MAE which is either by thermally induced magnetization reversal or by applying a torque onto the magnetization by turning the magnetic field. Both ways yield similar results for 1.1 ML Co/Au(11,12,12)