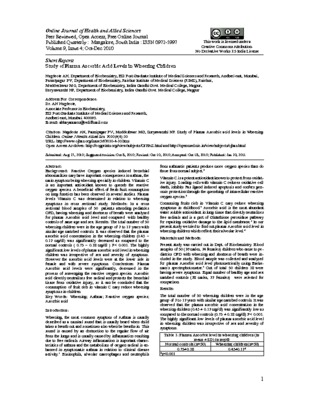 Background: Reactive Oxygen species induced bronchial abnormalities may have important consequences in asthma, the main symptom being wheezing specially in children. Vitamin C is an important antioxidant known to quench the reactive oxygen species. A beneficial effect of fresh fruit consumption on lung function has been observed in several studies. Plasma levels Vitamin C was determined in relation to wheezing symptoms in cross sectional study. Methods: In a cross sectional blood samples of 50 patients attending pediatrics OPD, having wheezing and shortness of breath were analyzed for plasma Ascorbic acid level and compared with healthy controls of same age and sex. Results: The total number of 50 wheezing children were in the age group of 2 to 12 years with similar age matched controls. It was observed that the plasma ascorbic acid concentration in the wheezing children (0.43 – 0.12 mg/dl) was significantly decreased as compared to the normal controls ( 0.75 – 0.18 mg/dl ) P< 0.001. The highly significant low levels of plasma ascorbic acid level in wheezing children was irrespective of sex and severity of symptoms. However the ascorbic acid levels were at the lower side in female and with severe symptoms. Conclusions: Plasma Ascorbic acid levels were significantly, decreased in the process of scavenging the reactive oxygen species. Ascorbic acid directly neutralizes free radical and protects the bronchial tissue from oxidative injury, so it can be concluded that the consumption of fruit rich in vitamin C may reduce wheezing symptoms in children