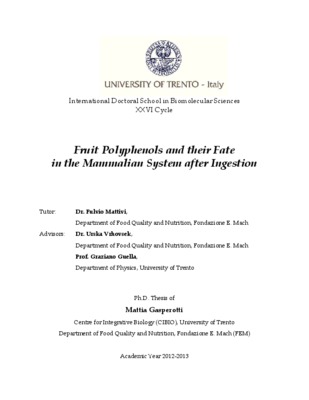 Fruit polyphenols and their fate in the mammalian system after ingestion

A range of different polyphenols can be ingested in a bowl of polyphenol-rich fruit, going from one-phenol hydroxybenzoic acid to more complex polymeric compounds. Epidemiologically, polyphenol consumption has been associated with a reduced risk of cancer and cardiovascular disease and neurological protection against brain ageing. However, only a small proportion of native polyphenols (5-10%) are absorbed and the remainder reach the colon, where they are extensively metabolised by the gut microbiota. The colonic microbiota produces a relatively small number of polyphenol microbial metabolites from a large number of different dietary polyphenols. During subsequent tissue distribution, the target organs and the effective concentration circulating remain largely unreported. This Ph.D. thesis is divided into two parts: chemical analysis of food composition and in vivo bioavailability of polyphenol metabolites. Metabolomics offers an innovative approach that has recently been shown to be effective in both food chemistry and nutritional bioavailability studies. Polyphenol composition in strawberries is studied in the first part of this Ph.D. thesis, with the aim of evaluating nutritionally significant amounts of polyphenols before ingestion. In this context, a targeted method for quantitative analysis of multiple classes of phenols was developed. A high sensitivity MRM-based method for 135 phenolics with a wide dynamic range was obtained, providing valuable insight and assisting with the analysis of complex matrices such as fruit, and more in general food. Application of the method was tested in Fragaria spp., and along with another rapid method for the analysis of anthocyanins and ellagitannins, provided a general overview of polyphenol composition in strawberries. A total of 56 individual compounds were accurately identified and quantified, some of them for the first time, their concentration ranging from 1 ug/100 g for low abundant polyphenols to 40 mg/100 g of fresh fruit. Moreover the isolation of some ellagitannins and definition of their profile in Fragaria spp. was carried out during fruit ripening. Clarification of the main ellagitannin, agrimoniin, was obtained by isolation and it was ambiguously assigned as the main ellagitannin present in the diet. In the second part of this Ph.D. thesis the in vivo bioavailability of a dose of polyphenol microbial metabolites reflecting dietary consumption of fruit was studied. The focus was on the metabolites of polyphenols which can be found in the bloodstream after gut microflora metabolism. Their distribution was explored in rats in different organs, in particular in the brain, considering their possible neuropreventive properties. Development of a specific quantitative method for the quantification of selected polyphenol microbial metabolites made it possible to analyse complex biological samples resulting from in vivo trials with rats treated with a nutritionally significant dose of polyphenol microbial metabolites, intravenously injected. A high-throughput, sensitive and reproducible method for 23 polyphenol metabolites in six different biological matrices was developed. A purification protocol made it possible to obtain cleaner and more concentrated samples, with low limits of quantification. Specific organ-tropism was observed, mainly hepatotropism. Remarkably, in this study the brain was reported to be one of the target organs for these molecules, already being present at basal level or increasing their concentration after treatment. Furthermore, the amount of 10 out of 23 compounds significantly increased with a nutritionally significant dose