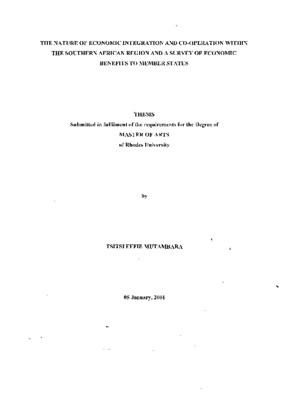 The transformation of SADCC into the Southern African Development Community (SADC) has paved the way towards closer regional economic integration in southern Africa. The regional grouping no longer only focuses on sectoral cooperation, but is steadily moving towards increased cooperation in trade development and promotion, industrial development and the diversification of national economies, with the aim of increasing regional economic integration. A free trade area ranks second lowest in the steps towards the highest levels of economic integration. Thus, the signing of the SADC Trade Protocol, which serves to pave way for a SADC Free Trade Area, has initiated steps to facilitate and promote the formal economic integration of all countries in the southern African region. It has been noted that at various periods, the region has adopted a variety of approaches to integration. As such, the present study reviews the different approaches to integration, namely the market integration model, the neo-functional integration model, the development integration model and the theory of common markets. Since the essential question with which this thesis is concerned is whether, and to what extent, the benefits expected from SADC and SACU in terms of their aims and objectives have accrued to member states, an insight into the expected benefits arising from the application of each theoretical framework can help to facilitate an evaluation of the benefits which the countries have enjoyed from these two regional groupings. The thesis highlights that throughout the ten years during which the original SADCC was in place, it based its approach to regional integration on the neo-functional and development integration models, although the former tended to be more dominant. With the regional grouping transforming into SADC, the market integration model was adopted, even though the grouping still had features of the aforementioned approaches. The relevance of the three approaches can be seen in: (i) the continued importance of SADC's sectoral projects, particularly in the field of transport and communication: (ii) continued attempts to put in place a suitable regional) industrial development strategy and implement policies to attract foreign investment; and (iii) the signing of the SADCC Trade Protocol to facilitate the implementation of a free trade area. The thesis argues that member states have enjoyed considerable economic benefits from the SADC sectoral projects. However, in some cases, members have lost out on potential benefits as a result of projects failing to be implemented or completed, mainly due to inadequate funding. Further, delays and inefficiencies at some border posts constitute significant non-tariff barriers which could be a hindrance to intra-regional trade. Progress towards diversification of exports has been limited as the region still relies mostly on the export of the traditional agricultural and mineral raw materials. While all countries have made efforts to diversify their industrial bases, attempts at implementing a meaningful regional industrial development strategy have met with limited success. Intra-regional trade has been increasing over the years. Since the SADC Trade Protocol only came into effect in September 2000, the increased levels of trade integration in the region appear to have been a result of the bilateral trade agreements between countries, and the customs union between South Africa and Botswana, Lesotho, Namibia and Swaziland (BLNS), as well as the structural adjustment programmes and the significant growth experienced in some countries. Outstanding intra-regional trade volumes have been experienced within SACU. In trade terms, benefits have varied between member states, with the more powerful countries like South Africa, Zimbabwe and Mauritius experiencing substantial trade surpluses vis-a.-vis their trade, partners. Countries with bilateral preferential trade agreements have also benefited more due to increased access into each other's markets compared to those without or with bilateral trade agreements of an MFN nature. However, it is important to note that, despite the increase in trade integration in the region, southern Africa is still heavily dependent on the rest of the world for its export markets and as its source of imports. The study finds that intra-industry trade (IIT) exists within the region and, in a number of sectors, high IIT indices are recorded;--although some such sectors do not display significant trade - voIumes. The opening of the region through the implementation of the SADC FTA could promote the expansion of IIT .as-the free trade area )'Till create an enlarged regional market. As such, SADC could benefit from dynamic effects such as scale economies in production and marketing, with member states working on having complementary production structures so as to facilitate specialisation. The thesis argues that the potential for intra-regional trade expansion in the SADC FT A also exists bearing in mind trade complementarity between countries as well as revealed comparative advantages in different sectors. One of the benefits which have accrued to the region as a result of facilitating and promoting greater cooperation and deepening the integration process has been an expansion in cross border investment. The study finds that the 1990s witnessed a gradual increase in cross border investment to take advantage of investment opportunities in member states. South Africa has become the primary source of foreign direct investment flows to a number of SADC countries, with mergers and acquisitions being the dominant mode of its foreign direct investment. Cross border investment helps in supplementing low domestic savings, thus providing substantial parts of the shortfall in capital needed to finance economic growth and development. It can thus promote development in the industrial sector, transfer of capital, skills and technology, and development of infrastructure. Many SADC countries are unable to compete effectively due to lack of export supply capacity. The thesis suggests that capitalising on investment by South African firms could enhance local supply capabilities and raise export competitiveness. The study concludes that for market integration to succeed in the SADC region, the neofunctional and development integration approaches need to be actively pursued simultaneously, particularly with respect to infrastructural and industrial development