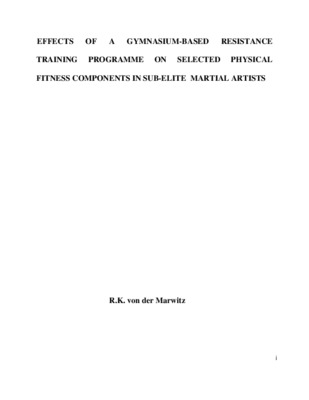 The aim of the study was to explore, describe and compare the impact of a 12-week intervention on selected physical fitness variables in sub-elite martial artists. The experimental group (expG) participated in a combination of alternating dojo and gymnasium-based resistance training, each bi-weekly, with the comparison group (comG) exclusively undergoing four conventional dojo training sessions weekly. The variables measured included; anthropometric measures (height, body mass and percentage body fat); functional core muscular endurance; hamstring flexibility; upper body muscular strength and endurance; lower body muscle strength; and static balance. A quasi-experimental research design was employed, with pre - and post - test assessments after a 12 week intervention period. Purposive and snowball sampling techniques were employed from existing dojo’s in Port Elizabeth, with a randomised allocation of participants into two groups. The gymnasium-based training programme was designed according to the national conditioning and strength association (NCSA) principles of resistance training. The identified variables were tested at a 95% level of probability (p < 0.05). Similar trends in performance improvement were evident for both the expG and compG in of the majority of the selected physical fitness variables. One-way, two-sample and independent t-tests analysis found no statistical significant intra- group or inter-group differences in any of the selected dependant variables for both groups. Thus, the supplemental resistance training programme was not superior to that of the conventional dojo training programme in improving aforementioned variables. Despite the lack of statistical significance, these results indicate that a structured and supervised resistance training programme in a gymnasium may serve as an alternative method of intervention for improving physical fitness in sub-elite mixed martial artists. The resistance training programme should be specifically adapted according to the individual practitioner’s strengths and weaknesses, as well as to the type of martial art being practised