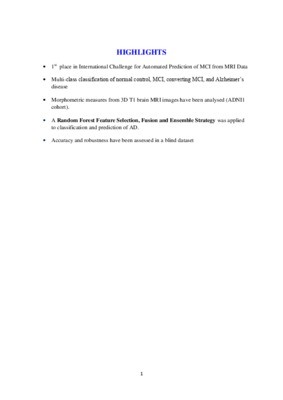 Background In the era of computer-assisted diagnostic tools for various brain diseases, Alzheimer’s disease (AD) covers a large percentage of neuroimaging research, with the main scope being its use in daily practice. However, there has been no study attempting to simultaneously discriminate among Healthy Controls (HC), early mild cognitive impairment (MCI), late MCI (cMCI) and stable AD, using features derived from a single modality, namely MRI. New method Based on preprocessed MRI images from the organizers of a neuroimaging challenge,3 we attempted to quantify the prediction accuracy of multiple morphological MRI features to simultaneously discriminate among HC, MCI, cMCI and AD. We explored the efficacy of a novel scheme that includes multiple feature selections via Random Forest from subsets of the whole set of features (e.g. whole set, left/right hemisphere etc.), Random Forest classification using a fusion approach and ensemble classification via majority voting. From the ADNI database, 60 HC, 60 MCI, 60 cMCI and 60 CE were used as a training set with known labels. An extra dataset of 160 subjects (HC: 40, MCI: 40, cMCI: 40 and AD: 40) was used as an external blind validation dataset to evaluate the proposed machine learning scheme. Results In the second blind dataset, we succeeded in a four-class classification of 61.9% by combining MRI-based features with a Random Forest-based Ensemble Strategy. We achieved the best classification accuracy of all teams that participated in this neuroimaging competition. Comparison with existing method(s) The results demonstrate the effectiveness of the proposed scheme to simultaneously discriminate among four groups using morphological MRI features for the very first time in the literature. Conclusions Hence, the proposed machine learning scheme can be used to define single and multi-modal biomarkers for AD