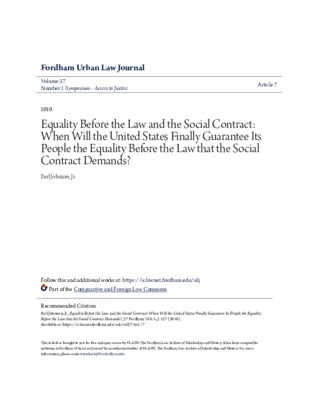 Most European and several countries elsewhere in the world have recognized a right to counsel in many or most civil cases for as long as decades or even centuries - and many of these countries are willing to spend, proportionately, anywhere from three to twelve times as much of their national income as the U.S. currently does on the provision of counsel to their lower income populations in civil cases. This Article examines how courts around the world have interpreted the constitutional provisions emanating from the theory that underpins the right to equality before the law and why these decisions are relevant to courts in the U.S. The Article then describes how nations that have the right as a matter of statutory or constitutional law have implemented it. This leads to discussion of a draft generic state statute that would apply some of the lessons learned from the foreign experience to the American context. Finally, the Article considers the likelihood that American jurisdictions will adopt the right and make the level of financial commitment that so many other nations already have made