Big Brother publici nudi "ultimativnu stvarnost" osiguranu cjelodnevnim nadzorom televizijskih kamera, o čemu je polemizirano od početka njegova prikazivanja u Europi i svijetu. Imajući to na umu, ovaj rad je pristupio Big Brotheru iz perspektive izvedbenih studija, pokušavajući u njemu prepoznati neke od mogućih izvedbi.This paper tries to shed a different light on the "Big Brother" phenomenon as it tries to imply some of the ideas which have inspired performance theories. Up until now from the academic point of view the "Big Brother" phenomenon was mostly frowned upon, considered generally a bad influence or yet another product of late capitalism. Emphasising its connections to the economic and political forces which are trying to control the innocent auditorium through the media, "Big Brother" has been presented as a none dimensional field of research with only one possible model. The idea of this paper was to introduce performance theory into the study of "Big Brother" in hope that it would induce different points of view not just for the phenomenon itself but for the postmodern media in general. The article is based on the understanding that the performances are symbolic acts which can be considered as texts because they convey meanings to their public. Taking that into consideration, this paper tried to recognise some of the communicative strategies through the performances of "Big Brother" housemates. Three levels of performance were recognised in the fourth season of "Big Brother" on the Croatian RTL TV station. On the first, most general level, the author emphasises the performative attributes of the series as well as the postmodern media itself. On the second level the performance of gender in "Big Brother" is underlined, which is especially important since it includes the appearance of the first homosexual person in the Croatian series. The performative aspect of gender is used to explain how and why the non-dominant gender performance is unacceptable to others, primary male housemates. Finally, on the third level it is shown how individual performance is interpreted as part of a wider strategy to fit amongst others in the "Big Brother" house and potentially to win the sympathies of the viewers 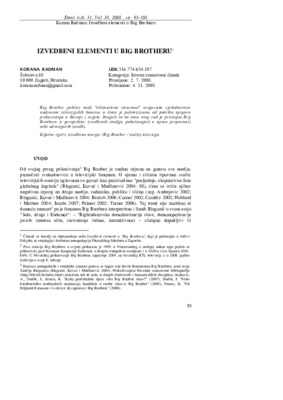