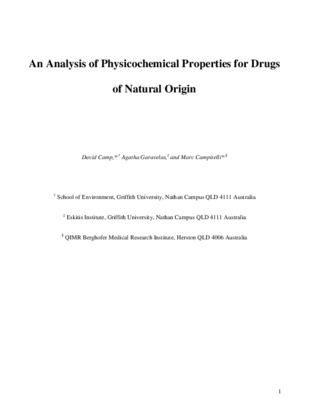 Analysis of Physicochemical Properties for Drugs of Natural Origin

The impact of time, therapy area, and route of administration on 13 physicochemical properties calculated for 664 drugs developed from a natural prototype was investigated. The mean values for the majority of properties sampled over five periods from pre-1900 to 2013 were found to change in a statistically significant manner. In contrast, lipophilicity and aromatic ring count remained relatively constant, suggesting that these parameters are the most important for successful prosecution of a natural product drug discovery program if the route of administration is not focused exclusively on oral availability. An examination by therapy area revealed that anti-infective agents had the most differences in physicochemical property profiles compared with other areas, particularly with respect to lipophilicity. However, when this group was removed, the variation between the mean values for lipophilicity and aromatic ring count across the remaining therapy areas was again found not to change in a meaningful manner, further highlighting the importance of these two parameters. The vast majority of drugs with a natural progenitor were formulated for either oral and/or injectable administration. Injectables were, on average, larger and more polar than drugs developed for oral, topical, and inhalation routes.Full Tex