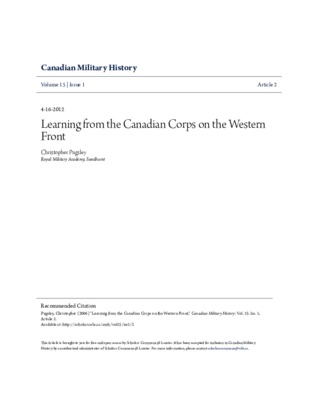 Learning from the Canadian Corps on the Western Front

By Christopher Pugsley
Get PDF (6 MB)

There is a curious paradox about the Canadian Corps that is summed up in this quotation from Canadian Brass, Stephen J. Harris’s study of the evolution of a professional army in Canada. How did this military organisation become so effective in war, considering the background it had and the structure that supported it for most of its existence? This model of tactical excellence was born amid the chaos of Canadian Minister of Defence Sam Hughes’ egomaniacal control at Valcartier Camp. It was beset by jealousies, political backhanders, corruption and influence peddling, and saddled with favourites as incompetent officers who at best were ’very weak” and had “no power or habit of command.”2 Hughes determined to ensure that no Regular soldier received a command appointment, and instead put in his favourites. These were drawn from the citizen militia, whose ability was summed up by the young iconoclast and future military theorist J.F.C. Fuller, who remarked that the Canadians had potential only “if the officers could all be shot.”3 Yet the Canadian Expeditionary Force (CEF) rose above this administrative nightmare, even if its impact continued to haunt the force for most of its existence