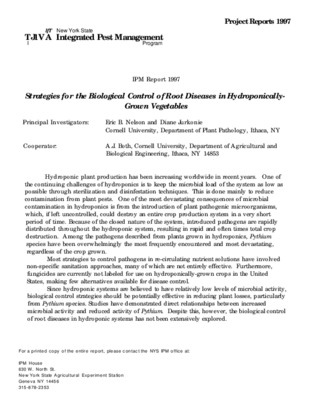 NYS IPM Type: Project ReportHydroponic plant production has been increasing worldwide in recent years. One of the continuing challenges of hydroponics is to keep the microbial load of the system as low as possible through sterilization and disinfestation techniques. This is done mainly to reduce contamination from plant pests. One of the most devastating consequences of microbial contamination in hydroponics is from the introduction of plant pathogenic microorganisms, which, if left uncontrolled, could destroy and entire crop system in a very short period of time. Because of the closed nature of the system, introduced pathogens are rapidly distributed throughout the hydroponic system, resulting in rapid and often times total crop destruction. Among the pathogens described from plants grown in hydroponics, Pythium species have been overwhelmingly the most frequently encountered and most devastating, regardless of the crop grown