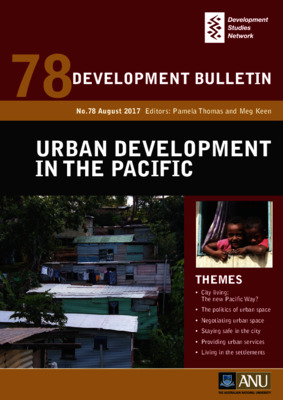 The rules of the game: Legal and political influences over land access in Honiara

This paper explores contemporary land tenure complexities, the challenges associated with them and how they have been addressed in Honiara. Particularly relevant to land allocations in Honiara has been the Commissioner of Lands and the Land Board. Prior to the establishment of a Land Board in 2014, the Commissioner of Lands had discretionary administrative powers to determine people’s access to urban land in Honiara, including when to exercise force as a process of exclusion (Hall et al 2011; Fraenkel 2004). I argue that the way the Commissioner of Lands exercised administrative power allowed some people control over access to urban land while others had to pursue access through different strategies, for example through leveraging claims of indigeneity (Allen 2012). I then examine the changes to the land laws which allowed for the establishment of a Land Board and how this has contributed to addressing access to urban land in Honiara