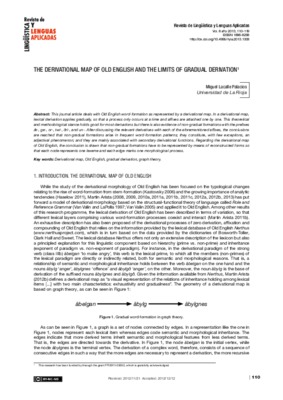 [EN] This journal article deals with Old English word-formation as represented by a derivational map. In a derivational map, lexical derivation applies gradually, so that a process only occurs at a time and affixes are attached one by one. This theoretical and methodological stance holds good for most derivations but there is also evidence of non-gradual formations with the prefixes ¿-, ge-, or-, twi-, ¿ri-, and un-. After discussing the relevant derivatives with each of the aforementioned affixes, the conclusions are reached that non-gradual formations arise in frequent word-formation patterns; they constitute, with few exceptions, an adjectival phenomenon; and they are mainly associated with secondary derivational functions. Regarding the derivational map of Old English, the conclusion is drawn that non-gradual formations have to be represented by means of reconstructed forms so that each node represents one lexeme and each edge marks one morphological process.This research has been funded by through the grant FFI2011-29532, which is gratefully acknowledged.Lacalle Palacios, M. (2013). The derivational map of Old English and the limits of gradual derivation. Revista de Lingüística y Lenguas Aplicadas. 8(1):110-119. doi:10.4995/rlyla.2013.1308.SWORD1101198