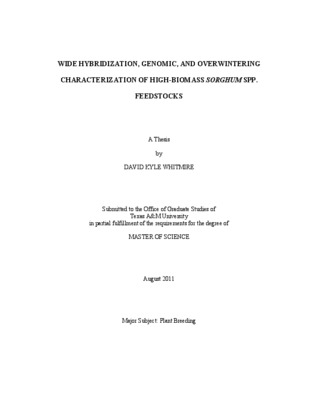 The federally mandated 36 billion gallons a year production goal for "advanced biofuels" by 2022 has created a demand for lignocellulosic feedstocks that are inexpensive to produce. The current lack of market development for lignocellulosic feedstocks incentivizes the development of versatile biomass products with greater end-use possibilities, as in either a forage or bioenergy system. High-biomass, perennial grasses offer dual-use potential in either forage or biofuel systems. In 2009 and 2010 controlled pollinations were made to evaluate the efficiency of producing interspecific hybrids between homozygous recessive iap/iap and Iap/- Sorghum bicolor (L.) Moench, cultivated sorghum, and three S. halepense (L.) Pers., johnsongrass, genotypes. The iap/iap genotype removes reproductive barriers to alien pollen in S. bicolor and aids in wide hybridization. Total seed set, germinable seed set, and hybrid production were significantly higher using the iap/iap genotype. The iap/iap S. bicolor genotype is a valuable tool available to plant breeders for the creation of wide hybrids with S. halepense. In a related study a bulked segregant analysis was conducted using bulked samples of S. bicolor, typical flowering S. halepense, non-flowering S. halepense, and putative triploid hybrids of the two species to identify unique markers for each bulk and to evaluate S. bicolor genetic material introgression into the non-flowering S. halepense genome. Thirty-nine and 23 markers were found to be unique to the S. bicolor and typical flowering S. halepense bulks, respectively. These unique markers could be used in a breeding program to identify interspecific hybrids. Alleles at fifteen markers were found in both the S. bicolor and non-flowering S. halepense bulks but not in typical flowering S. halepense and may help explain the non-flowering phenotype. In 2010 and 2011 a study was conducted to investigate the rhizome composition of 11 genotypes of Sorghum species and its relationship to overwintering. Genotype, environment, and sampling date had significant effects on rhizome metabolite concentrations. Overwintering capacity was related to fructans and crude protein concentrations and NIRS (Near Infrared Spectroscopy) was effective at estimating these values. This information can be used to screen for stronger perennial parents to be used in future breeding programs