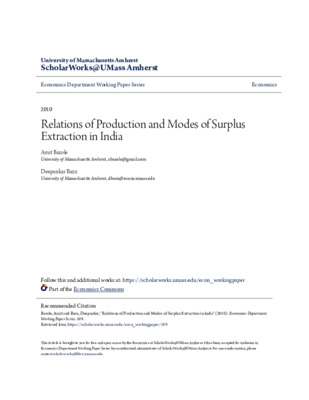 Relations of Production and Modes of Surplus Extraction in India

By Amit Basole and Deepankar Basu
Get PDF (1 MB)

This paper uses aggregate-level data, as well as case-studies, to trace out the evolution of some key structural features of the Indian economy, relating both to the agricultural and the informal industrial sector. These aggregate trends are used to infer: (a) the dominant relations of production under which the vast majority of the Indian working people labour, and (b) the predominant ways in which the surplus labour of the direct producers is appropriated by the dominant classes. This summary account is meant to inform and link up with on-going attempts at radically restructuring Indian society