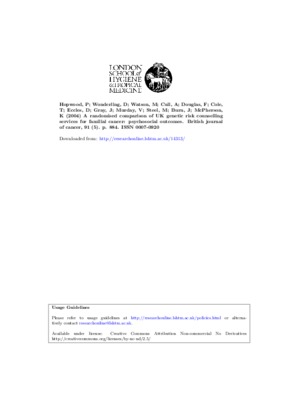 The aim of the study was to compare psychosocial outcomes for 50 new clinic attendees, referred for cancer genetic counselling to five UK centres. The centres represented England, Scotland and Wales, and were randomly selected from groups ranked by different levels of clinical activity in cancer genetics practice. Questionnaires assessed demographic data, risk perception, mental health and use of health services pre-consultation and at 1 and 12 months follow-up. Satisfaction was measured for attendees and referring doctors at follow-up. A total of 256 unaffected adults fulfilled the study criteria. The five centres varied widely with respect to service organisation and activity, but all had a greater proportion of unaffected attendees with a breast cancer risk (61-91%) than either a bowel cancer risk (0-33%) or ovarian cancer risk (3-25%). There were no significant differences in the psychosocial data between centres pre-counselling. No significant change over time occurred for any of the centres for risk perception or general psychological distress. There were significant differences between centres in reduction of cancer worry from baseline to 12 months and with the number of women who were recommended to have mammographic surveillance who had not received this. Overall, one-third of women for whom mammography had been recommended had not been screened within 1 year of follow-up. Subsequent attendance at the GP, but not at a hospital, was associated with risk level, but differences between centres could not be analysed. Satisfaction differed significantly between centres for 4 : 14 aspects of service provision and with 3 : 17 items concerning communication; satisfaction was high overall. Over 90% of referring doctors were moderately/very satisfied with the service, but 23% were dissatisfied with waiting times and 19% with access to preventive treatment. Results differed significantly between centres for doctor's satisfaction with the provision of referral criteria and prescribing information. In conclusion, there were relatively few significant differences in psychosocial outcomes between centres, considering the wide variation in service organisation and activity. These significant differences were not consistent across the centres, therefore, differences could not be linked to specific aspects of service provision