From Bacteria to Fish: Ecological Consequences of Seasonal Hypoxia in a Great Lakes Estuary

The occurrence of bottom-water hypoxia is increasing in bodies of water around the world. Hypoxia is of concern due to the way it negatively impacts lakes and estuaries at the whole ecosystem level. During 2015, we examined the influence of hypoxia on the Muskegon Lake ecosystem by collecting surface- and bottom-water nutrient samples, bacterial abundance counts, benthic fish community information, and performing profiles of chlorophyll and phycocyanin as proxies for phytoplankton and cyanobacterial growth, respectively. Several significant changes occurred in the bottom waters of the Muskegon Lake ecosystem as a result of hypoxia. Lake-wide concentrations of soluble reactive phosphorus (SRP) and total phosphorus increased with decreasing dissolved oxygen (DO). Bacterial abundance was significantly lower when DO was less than 2.2 mg L-1. Whereas there were no drastic changes in surface chlorophyll a concentration through the season, phycocyanin increased threefold during and following a series of major wind-mixing events. Phycocyanin remained elevated for over 1.5 months despite several strong wind events, suggesting that high SRP concentrations in the bottom waters may have mixed into the surface waters, sustaining the bloom. The fish assemblage in the hypolimnion also changed in association with hypoxia. Overall fish abundance, number of species, and maximum length all decreased in catch as a function of bottom DO concentrations. The link between hypoxia and wind events appears to serve as a positive feedback loop by continuing internal loading and cyanobacterial blooms in the lake, while simultaneously eroding habitat quality for benthic fish 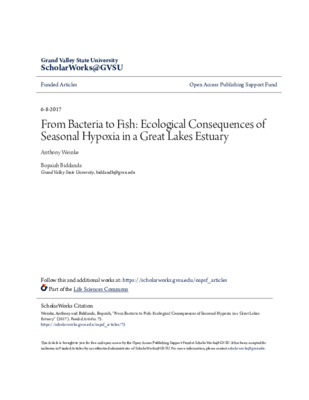 This paper was published in Scholarworks@GVSU.