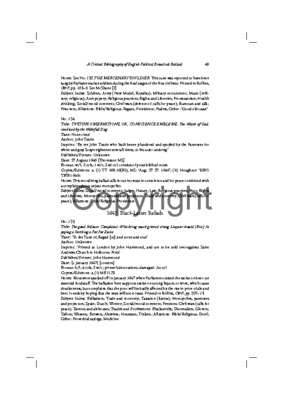 Ballads on ‘affairs of state’ have been largely eschewed by scholars of popular political history, despite the growing digital availability of ballad literature. McShane’s extensive critical bibliography makes these texts accessible for the first time by providing a systematically and rigorously researched bibliography of all recorded and published broadside ballads on affairs of state between the outbreak of the Bishops’ Wars in 1639 to the Glorious Revolution in 1688. Based on comprehensive research into all the major holdings in the UK and USA, the bibliography locates, dates and fully indexes more than 3,100 ballad sheets. McShane, an authority on English print culture, also provides a 10,000-word introduction based on this original research. It sets out the history of printing background of the genre; the importance of typographical and material analysis in helping to understand the broadside as a marketed medium; and the significance of its collecting history to any notion of the ballad as representative of popular political mentalites. A reviewer notes, ‘this comprehensive bibliographic survey, which often corrects previous errors on dating and in its notes offers invaluable contextual information, will open up new research pathways’ (English Historical Review, 2013). McShane has been invited to speak on this research on numerous occasions, including Reading University’s Early Modern Research Centre Colloquium, ‘Printed Image and Decorative Print, 1500–1750′ (2013); the 8th Bildlore Congress, Bassano, Italy (2012); for the international panel on Popular Culture and Media Diversity at the ESSHC Conference, Glasgow University (2012); the ‘Popular Music Participation and the People’ symposium, Goldsmiths (2012); and Leeds University ‘Text and Orality’ research seminar (2011). She is currently a consultant to the JISC-funded Integrating Broadside Ballad Archives project, Bodleian Library (2011–13), and the Popularisation and Media Strategies 1700–1900 project, Utrecht University, funded by the Netherlands Organisation for Scientific Research (2010–14)