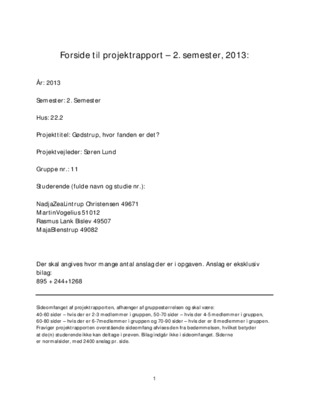 Gødstrup, where is it? The project is about public influence in the Region Midtjylland. The starting point is the hearing which was held in connection with the placement of Det Nye Sygehus i Vestjylland, which is to be located in Gødstrup. The project aims to examine how citizens have exercised their democratic rights and sought influence in the decision making. The project goes into depth with some of the challenges involved when a citizen wishes to involve themselves in politics and what motivates them to seek influence. To uncover this we apply Søren Juul’s solidarity concept, and Jacob Torfing’s theory of citizen groups and the citizens affiliation to these groups. Apart from this we use theories about democracy and power. These theories are used to examine how citizens can obtain influence, and which tools politicians have available to them, in order to involve citizens. The Projects methodology have been to use interviews in getting to the core of our case study and to collect the empirical data needed to analyze and compare the case with theory. The four interviews were made in collaboration with citizens and politicians, respectively for or against the proposed location. Based on the projects analysis, we conclude that the citizens encounter different barriers in their participation in the hearing. These barriers are primarily shown in the fact that politicians aren’t obligated, according to the Danish planning law to listen to the citizens. Because of this citizens don’t have the possibility to obtain a legitimate influence. However politicians are given the opportunity to involve citizens as desired and still be subjectet to the Danish planning law. Therefore the degree of influence can vary greatly depending on the decision being made