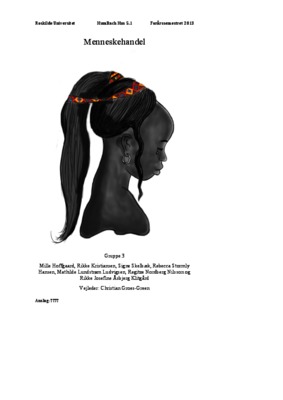 This project revolves around the discourse that is created in relation to human trafficking in Den- mark. To assess this, we have chosen to focus on “En dag mere” by Mogens Albert Perdersen and “Solgt til sex” by Jens Høvsgaard. These books have be used to explore which understanding the two authors have regarding human trafficking in Denmark, since they are two significant characters behind the accordingly discourse. In order to analyze and interpret the discourses in the books, we have worked with Jo Doezema’s theory of myths and chosen to look at the discursive manufactur- ing of human trafficking as a myth. To reveal how this myth is portrayed in the two books, we have worked with Norman Fairclough’s critical discourse analysis as a method of analyzing the use of language, themes and main actors in the two books. As a part of our analysis, we have also exam- ined which keywords stood out during the reading of the books. Afterwards, we have discussed how the mentioned discourse has been constructed, who would want to affect it and furthermore which aspects could have an influence on this as well. Linked to this, we have also worked with Edward Said’s theory on orientalism as a possible explanation of which interests could lie in constructing a certain discourse revolving human trafficking. As a result, we have answered the overall question: “How is the discourse revolving human trafficking in Denmark constructed in the books “En dag mere” by Morgens Albert Perdersen and “Solgt til sex” by Jens Høvsgaard. We have concluded that articulating the problem, human trafficking, creates the discourse. This discourse has been created in a specific way by the authors, which affects the whole discourse. Firstly the discourse is de- scribed very dualistic, which makes the situation of slavery women easier to relate to. Secondly the discourse is very affected by the authors understanding of the problem, since their point of views are the public orientation. Finally we have chosen to provide a perspective on the white slavery