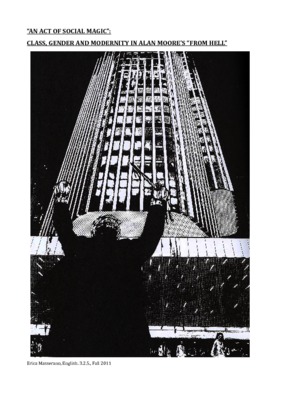 "An Act of Social Magic": Class, Gender and Modernity in Alan Moore's From Hell

By Erica Masserano
Get PDF (4 MB)

Loosely based on the Ripper murders in 1880s London, the graphic novel From Hell, written by Alan Moore and illustrated by David Gibbons, portrays the Victorian age as a site of class and gender struggle through the juxtaposition of two liminal opposites: the lower-class, female prostitute and the upper-class, male Freemason. This dissertation examines the interplay between the two character types through a socio-cultural analysis that spaces from Victorian ideology, to the condition of the urban working class woman in London, to the traditions and views on gender of the Western esoteric tradition. In this fictional interpretation, the Ripper murders grow to symbolize the triumph of the patriarchy, and usher in a new century of shadow, the 20th