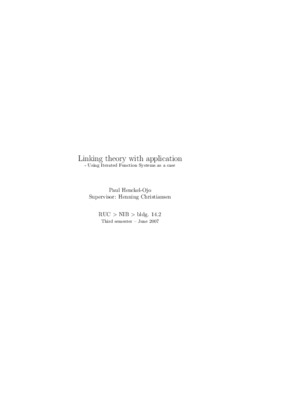 By Paul Henckel-Ojo
Get PDF (2 MB)

Linking theory with application is an aspect which I think is highly interesting. Many theories are around today, and being able to put them in to practice - for whatever practice as they might be put into, is an opportunity of innovative new discoveries. In this project it has been the aim to make an analysis of such an event, of a theory that have found its way into practice. It is the theory of iterated function systems (an area of Fractal Geometry). And the application which it has been a part of, is image compression. By making clear, the specifics of the theory, it will be possible to notice its historical developments and identify an evt. Eureka-moment. However, making the specifics clear proved a more difficult task than expected, therefor the discussion is pretty weak. Feedback from examination: The mathematical statements in the report are on an advanced level, but not explained fulfillingly or in a clear way. Most of the mathematical Definitions listed in the report are not Definitions but Theorems and require proofs in order to be valid. Some of the pictures/illustrations should be explained better in the text. Too many Wikipedia references - can not be used for scientific validation. The Application-chapter could have been expanded with more information on the different compression methods and their performance compared to IFS compression. The Discussion is more like a perspective and does not discuss the results or the relation to the problemformulation