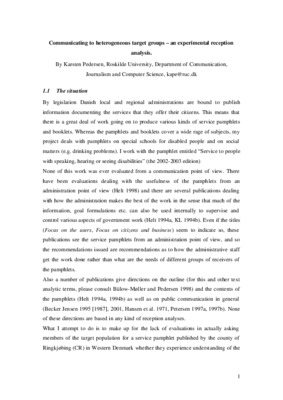 By Karsten Pedersen
Get PDF (31 KB)

The paper proposal is part of a full-scale discourse analysis of a series of service information pamphlets published by the county of Ringkjøbing in Western Denmark. The project is an investigation of various aspects of the fact that government agencies as well as local and regional authorities very often have to communicate to rather heterogeneous target groups that have little more in common than a certain geographical habitat. That goes against most schoolbook teaching in the field of communication, but is none the less the terms with which that kind of communication has to live. In the paper I investigate the reception of one of the service pamphlets published by the county of Ringkjøbing as well as the reception of a modified version of it. The reception analyses are interviews with a number of interviewees that use the services offered by the county and will try to reveal what people get out of the information provided in the pamphlet. The receivers that are subjected to the original pamphlet do not see the experimental version. Likewise the receivers that are subjected to the amended version do not see the original. I do so in order for the reception situations to be as identical as possible, thus creating fertile grounds for comparisons. The amendments will follow traditional advice for improving on professional communication, viz., direct address, active constructions, verbs rather than nominalizations etc., and it is my intention to refute or document the notion that such grammatical changes have positive effects on the intelligibility of texts. The attempts to document such effects are scarce and that is one of the backgrounds for my involvement in the project. If I am able to show that the changes do have an effect, the literature on conveying professional communication will be able to make a much stronger case