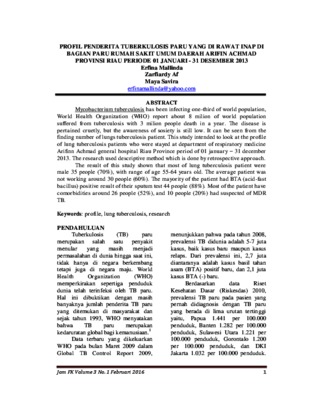 Mycobacterium tuberculosis has been infecting one-third of world population, World Health Organization (WHO) report about 8 milion of world population suffered from tuberculosis with 3 milion people death in a year. The disease is pertained cruetly, but the awareness of sosiety is still low. It can be seen from the finding number of lungs tuberculosis patient. This study intended to look at the profile of lung tuberculosis patients who were stayed at department of respiratory medicine Arifinn Achmad general hospital Riau Province period of 01 january – 31 december 2013. The research used descriptive method which is done by retrospective approach. The result of this study shown that most of lung tuberculosis patient were male 35 people (70%), with range of age 55-64 years old. The average patient was not working around 30 people (60%). The mayority of the patient had BTA (acid-fast bacillus) positive result of their sputum test 44 people (88%). Most of the patient have comorbidities around 26 people (52%), and 10 people (20%) had suspected of MDR TB