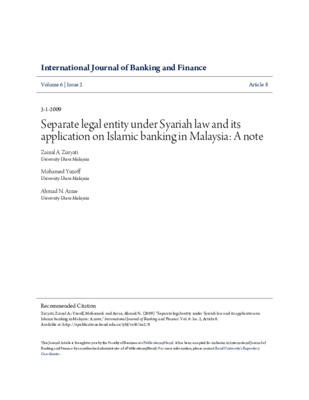 Separate legal entity under Syariah law and its application on Islamic banking in Malaysia: A note

The principle of separate legal entity – that is, after the incorporation of a company, it is regarded as an artifi cial person or juridical person who has the rights and responsibilities similar to a living person - has been widely accepted and applied in the world of business, trade and industry. In Malaysia, an Islamic banking institution is incorporated under the Companies Act 1965 where after its incorporation, it becomes a legal entity separated from its members and shareholders. In the case of Bank Islam Malaysia Berhad v. Adnan bin Omar (1994), the court held that Bank Islam Malaysia Berhad is a corporate institution created by statute. This case has been decided based on civil law system, not under the Islamic legal system. Since the products offered by an Islamic banking institution is solely in harmony with Islamic principles, one fundamental legal question yet to be resolved is whether the principle of separate legal entity is recognised under the Syariah law. This paper aims to discuss the issue of separate legal entity in Islam and its application to the Islamic banking institutions