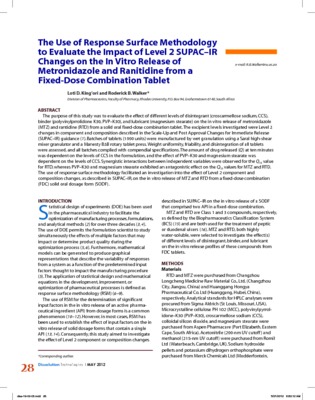 The purpose of this study was to evaluate the effect of different levels of disintegrant (croscarmellose sodium, CCS), binder (polyvinylprrolidone K30, PVP–K30), and lubricant (magnesium stearate) on the in vitro release of metronidazole (MTZ) and rantidine (RTD) from a solid oral fixed-dose combination tablet. The excipient levels investigated were Level 2 changes in component and composition described in the Scale-Up and Post Approval Changes for Immediate Release (SUPAC–IR) guidance (1). Batches of tablets (1000 units) were manufactured by wet granulation using a Saral high-shear mixer granulator and a Manesty B3B rotary tablet press. Weight uniformity, friability, and disintegration of all tablets were assessed, and all batches complied with compendial specifications. The amount of drug released (Q) at ten minutes was dependent on the levels of CCS in the formulation, and the effect of PVP–K30 and magnesium stearate was dependent on the levels of CCS. Synergistic interactions between independent variables were observed for the Q10 value for RTD, whereas PVP–K30 and magnesium stearate exhibited an antagonistic effect on the Q10 values for MTZ and RTD. The use of response surface methodology facilitated an investigation into the effect of Level 2 component and composition changes, as described in SUPAC–IR, on the in vitro release of MTZ and RTD from a fixed-dose combination (FDC) solid oral dosage form (SODF).