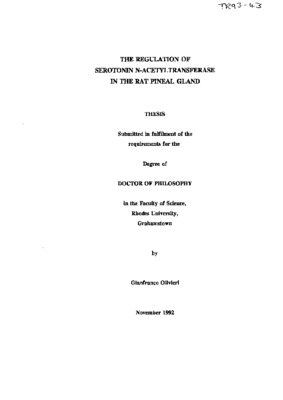 The regulation of Serotonin N-acetyltransferase in the rat pineal gland

By Gianfranco Olivieri
Get PDF (6 MB)

The synthesis of the pineal hormone, melatonin, is finely regulated by the pineal enzyme serotonin N-acetyltransferase (NAT). In the absence of light, the activity of NAT is markedly enhanced by the release of nor-adrenaline from sympathetic nerve endings in the pineal. Exposure of animals to light during darkness causes a sudden and dramatic reduction in the activity of NAT. The present study investigated a possible mechanism for this sudden decline in NAT activity. These investigations included the determination of the effects of S-adenosylmethionine (SAM), adenosine nucleotides and calcium on NAT activity. In vitro experiments using SAM showed that pineals pre-incubated with SAM prior to adrenergic stimulation did not significantly alter NAT activity or pineal indoleamine metabolism. However, measurement of pineal cyclic AMP showed that SAM exposure reduced the adrenergic-induced rise in pineal cyclic AMP. Experiments using adenosine 5'-monophosphate (5'-AMP) showed that this nucleotide enhanced both dark- and isoproterenol-induced NAT activity. Adenosine 5'-triphosphate (A TP), on the other hand, reduced NAT activity with a concomitant reduction in pineal indoleamine metabolism. Exposure of isoproterenol-stimulated pineals in organ culture to propranolol resulted in a marked rise in ATP and adenosine 5'-diphosphate (ADP) synthesis accompanied by a decline in 5'-AMP levels as compared with pineals treated with isoproterenol alone. This then implies that exposure of animals to light could cause a change in pineal nucleotide levels. Since nucleotide levels are also controlled by calcium, experiments were carried out to determine the effect of calcium on pineal NAT activity. These experiments showed that ethyleneglycol-bis-N,N,N,N,-tetraacetic acid (EGTA) enhanced NAT activity whilst calcium reduced the activity in pineal homogenates, implying that calcium may act directly on NAT to regulate its activity. Exposure of pineal glands in organ culture to the calmodulin antagonist R24571 caused a rise in pineal cyclic AMP levels with a concomitant decrease in cAMP-phosphodiesterase activity. This was, however, accompanied by a decline in Nacetyl serotonin and melatonin synthesis. These findings implicate a number of factors in the regulation of pineal NAT activity. A mechanism for the regulation of pineal NAT is proposed.