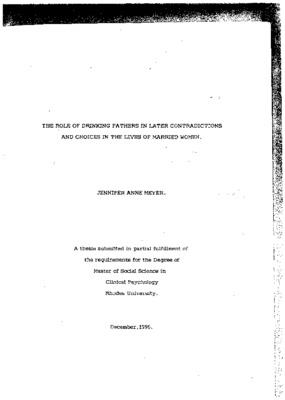 This qualitative, interpretive research sought to elicit explanations for certain contradictions and choices in the lives of four married women who were autonomous and assertive in their careers, yet non-assertive and compliant in their married lives. Such contradictions appeared both in their projected stories and semi-structured interviews. It had been expected that these projected stories would reveal autonomy and assertiveness, in line with the white, middle-class, feminist values of the subjects, but they had not. Explanations for these apparent contradictions were attributed to the effects of being children of alcoholic fathers. While the subjects' socialisation and vulnerability to family ideology provided certain explanations for the presence of such contradictions, an object relations account of the unconscious need to resurrect an ideal father and repair the generic family provided a more probable explanation,and accounted for their traditional gender role behaviour as ideal wives in spite of their non-traditional, feminist behaviour outside of marriage.