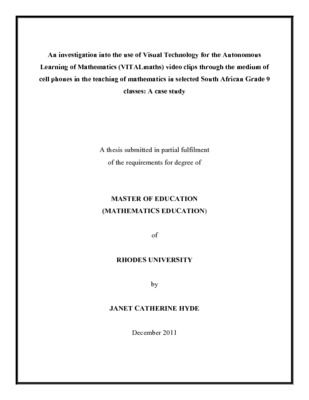 An investigation into the use of Visual Technology for the Autonomous Learning of mathematics (VITALmaths) video clips through the medium of cell phones in the teaching of mathematics in selected South African Grade 9 classes: a case study

This qualitative study examines the use of Visual Technology for the Autonomous Learning of mathematics (VITALmaths) video clips in three Grade 9 classrooms in the Eastern Cape, South Africa, two of which are in well-resourced ex-Model C schools and one in a semi-rural township school. The rapid development of mobile technology, especially in Africa, has opened up previously unexplored avenues in economy, communication and education (Aker & Mbiti, 2010), with a number of mobile learning initiatives being launched in South Africa (Botha & Ford, 2007; Vosloo & Botha, 2009). The VITALmaths project was developed collaboratively between the University of Applied Sciences Northwestern Switzerland and Rhodes University in South Africa (Linneweber-Lammerskitten, Schäfer and Samson, 2010). As the main platform for dissemination of the video clips is the cell phone, the study looked at the various aspects involved in the use of cell phones by learners in the classroom, as well as the incorporation of the clips into the teaching of three teachers. Consideration was given to whether or not the clips assisted the teachers in teaching, as well as whether or not they encouraged further exploration. The study was divided into six stages during which data was collected and analysed using an interpretive approach throughout. Data collection methods included semistructured interviews, questionnaires, observation, journals and reflective essays. The study revealed the participating teachers, having incorporated the clips into several lessons, found that these had a meaningful effect on their teaching practice, as well as on the engagement of the learners in the lessons. The majority of the learners involved in the study had access to cell phones, either their own or borrowed, and were able to download the video clips onto their phones from the website (www.ru.ac.za/vitalmaths). A number of learners found that the clips helped them find examples of specific mathematical concepts outside of the classroom, thus leading to further enquiry and exploration, while several learners downloaded and viewed additional clips. Overall findings showed that the VITALmaths video clips could be incorporated into teaching with relative ease.