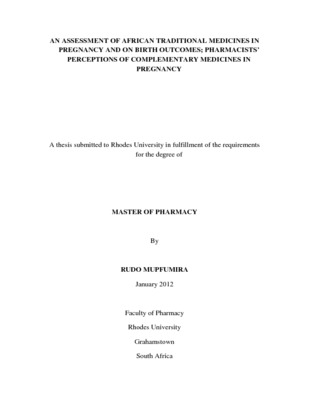 Increasing numbers of medicines are being used by pregnant South African women in the public sector during pregnancy, for the treatment of different biomedical and supernatural disease states and conditions. The motivation for the research is to support the development of more local pregnancy registries in order to strengthen evidence for the safety and efficacy of medicines used in pregnancy. A mixed methods approach was used. Women in their ninth month of pregnancy in a public sector setting, and four community pharmacists were identified. The women who met the inclusion criteria were recruited. One in-depth semi-structured interview was conducted with each woman before giving birth and data on their pregnancy outcomes were collected after labour. Coincidentally, the mother of one of the participants was found to be a traditional healer. She was also interviewed on the topic. A structured questionnaire was administered to the pharmacists. Ten pregnant women between the ages of 19 to 39 who had used or were using a traditional medicine during the pregnancy were recruited. All the participants had had at least one antenatal check up during their pregnancy with one having attended five times. No abnormal results were reported from any of the check ups or tests done during the visits. All of them had been to school and had at least Standard 8/Grade 10 education. Ten babies were seen between one and four days postpartum and no birth defects were obvious or were reported for any of them. The traditional healer did not provide additional information to what the women had said and confirmed that some of the practices the women reported were known to her as traditional medicine practices. All four pharmacists indicated that they considered complementary and alternative medicines (CAMs) to be “somewhat effective” and sold them at their pharmacies although none of them were aware of whether or not they were registered with the MCC. None of the pharmacists appeared to have an in-depth knowledge of traditional, complementary and alternative medicines (TCAMs). All four pharmacists said that it is important to have a basic understanding of TCAMs before using them, although they did not agree on the reasons for this. All of them felt that pharmacists have a professional responsibility to provide information on TCAMs (especially herbal preparations) and two felt that providing this information is part of a medical doctors’ responsibility. No harm from taking TCAMs could be shown. However herbal medicines have numerous ingredients some of which are unknown and taking these medicines is risky. The pharmacists in this sample were unsure whether they were accessing unreliable CAM information. Reliable sources of information and reference materials on CAMs to assist pharmacists and other healthcare professionals are needed. The apparent widespread use of TCAM in pregnancy indicates a need for documentation about its efficacy and safety. The establishing of TCAM pregnancy registries should seriously be considered. Due to the increase in CAM use, CAM education during pharmacists’ training as well as continuing professional development (CPD) in CAM for pharmacists in practice should be encouraged.