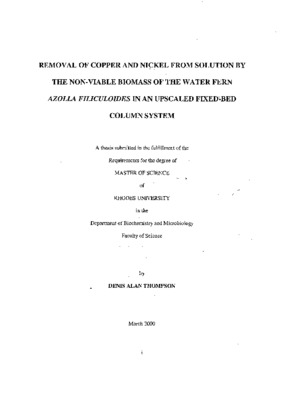 The potential of non-viable Azalia filiculaides for the removal of Cu and Ni from aqueous solutions and the possibility of scaling up existing lab scale Azalia column systems was investigated. The effects of factors such as metal starting concentration, pH and two metals in solution on the removal of Ni and Cu from aqueous solution by dried and crushed Azalia biomass were studied in batch systems. Aqueous solutions of Ni with starting concentrations between 1000 and 2000J.lmolll gave the most efficient Ni removal by Azalla biomass. For Cu the optimum starting concentration for adsorption was 50J.lmol/l. The adsorption capacity of both eu and Ni increased as the starting pH of the sorption media increased. The optimum pH for Ni adsorption was found at pH 7 and for Cu, at pH 5. - Awlla biomass had a higher. maximum binding capacity (qrnax) for Cu than for Ni at pH 5. The removal of both Cu allct Ni showed little or no variation with the presence another metal in solution. Kinetic studies show that both Cu and Ni adsorbed rapidly onto the Azalia biomass. The removal of Cu and Ni from aqueous solutions using non-viable Azalia biomass was investigated in a lab scale fixed-bed column and an upscaled 4L column system. The nonviable Azalla filiculaides biomass when dried and used in a column for adsorption of Cu and Ni showed good physical stability under many different conditions. Preparation of the biomass before it could be used in the columns was very simple and did not involve any significant pretreatment steps. Prolonged exposure to UV light decreases Azalia biomass capacity for Ni and Cu adsorption. Column adsorption of Cu and Ni from aqueous solutions was successfully upscaled approximately 100 times. Relative to the lab scale column, the 4L column performed better for the uptake of Cu and Ni per gram of biomass. The larger column was also able to operate at relatively higher flow rates. The biomass showed good reusability with little change in the amount of Ni adsorbed in 10 consecutive cycles. Electron micrographs showecf little or no change in the physical structure and integrity of the Azolla biomass after exposure to mineral acids, Ni solution and high flow rates over 10 consecutive adsorption and desorption cycles. As much as 80% Ni and 70 % Cu was recovered when desorption profiles were generated using O.lMHCI as a desorption agent. The 4L column system was also tested using a highly concen~rat:~ Ni plating bath solution.(Nicrolyte 1). Only 18 % of the Ni could be removed from the expended Nicrolyte 1 pla~Jng solution after treating only 25L, indicating that Azolla biomass is more suited for removal of metals from more dilute industrial effluents.