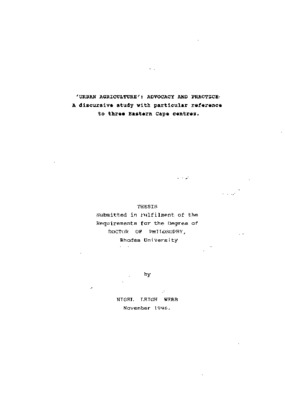 The purpose of this thesis is to explain the continued advocacy of 'urban agriculture' (UA) in the literature in the face of the seemingly modest role played by cultivation in practice. The analytical framework adopted isrthat of discourse, the theoretical underpinnings of which are derived from the early works of Foucault, and applications such as those of Escobar (1989; 1991) and Ferguson (1990). Using a discursive orientation involves two main tasks - an explanation of how 'UA' has gained some prominence and the man~er in which its currency is able to be maintained. The investigation included an in-depth analysis of the literature and empirical research in th!"e~Eastern Cape centres. The function of the empirical findings is to expose the discourse, as well as to extend the empirical base relating to 'urban agricultural' research in general. The thesis suggests that the growth in interest in 'UA' is a result of a Foucaultian "gap" opening in the discourse. Changes in the conceptualisation of development, the rise-in prominence of the urban poor and emerging ecodevelopment views, among others, have given proponents of "UA' greater room for manoeuvre. However, most case studies promote 'UA' despite providing little evidence of its role in household welfare. The way the discourse maintains its' currency is in the manner in which the objects of 'UA' are constituted. Firstly, the people are characterised as poor, largely divorced from their rural origins, and mainly female. Each of these assertions is questioned on the basis of the literature itself and the empirical findings. Secondly, in the practice of cultivation, emphasis is placed on the inputs used, and the crops that are produced. The treatment of both the inputs and the crops by the literature is cursory. Investigations show that land availability, garden size and irrigation water are e~pecially problematic and vegetable consumption remains low. Four types of alleged benefit associated with 'UA' are analysed - environmental and ecological, psychological and social, financial, and nutritional. In each case commonly held assumptions are undermined by closer investigation. Thus, the thesis contends that the role played by cultivation is a modest one. Most of the claims made on behalf of 'UA' are more congruent with development discourse than actual cultivation practice.