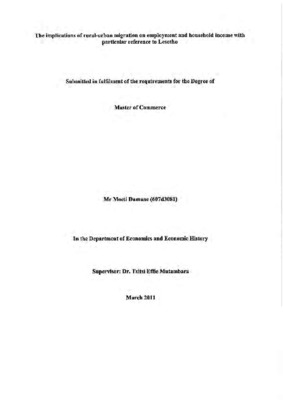 The research investigates the impact of internal rural - urban migration III Lesotho on household income and employment. Using data gathered from the 2002/03 household survey, the 2006 nationwide census and a questionnaire on rural - urban migration in Lesotho administered to 500 respondents in Maseru and Leribe, we estimate a logit model of the probability of employment in Lesotho in 2008 given a set of independent variables. The independent variables are respondent's work experience; years of education completed; employment status in 2004; employment status in 2008; gender; job skill level; place of residence in 2004 and a categorical variable that measures whether or not the respondent is a rural - urban migrant. The results suggest that migration and work experience have no significant impact on an individual's likelihood of being employed in the country's formal sector. Also, it was found that the higher the level of education an individual has, the less likely are their chances of employment in the country's formal sector because of the lack of formal jobs in the urban areas. Over 50% of Lesotho's workforce employed in the urban areas was discovered to work in the informal sector. The study concludes that there is a lack of jobs in Lesotho's urban formal sector that results in a thriving informal sector. The advantages of informal sector jobs to the rural - urban migrant include an increase in their standard of living as well as that of their family members left behind in the rural areas but the disadvantages include low levels of investor confidence that lead to a decrease in overall economic development and growth in the country.