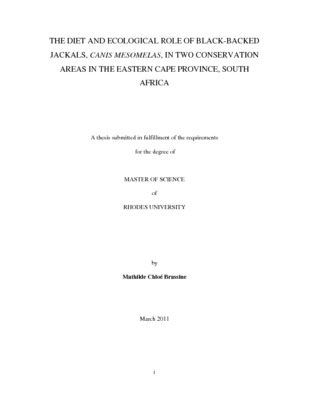 Mammalian predators are keystone species and can have disproportionately large impacts, relative to their abundance, on the communities and ecosystems they inhabit. In addition, predator-prey interactions (including bottom-up and top-down effects) are the fundamental linkage among species in food webs. Thus, understanding the food requirements of predators is imperative. There have been no comprehensive studies on the diet of black-backed jackals (Canis mesomelas) across a full seasonal cycle in the Albany Thicket Biome of the Eastern Cape Province. This biome is rich in plant diversity, is highly nutritious for herbivores and supports a large number of mammalian species, yet it is poorly conserved. The aim of the present study was to establish the diet of black-backed jackals on two conservation areas where thicket vegetation dominates (Great Fish River Reserve and Kwandwe Private Game Reserve). The diet was assessed using scats collected monthly from June 2009 to May 2010 and a sample of 25 stomachs over the same period. At both sites and across all seasons, mammalian hair was encountered most often (93% of all scats) and a total of 23 mammal species were consumed. Of the mammals recorded in the scats, hair from several ungulate species was encountered most frequently and these were mostly hider species (offspring hidden in tall vegetation just after birth). On a seasonal basis, the proportion of mammalian hair was lowest in autumn. However, the contribution of fruits (Carissa haematocarpa, Diospyros lycioides and Grewia robusta) to the diet was significantly higher during this season. This suggests that black-backed jackals may employ diet switching in the Eastern Cape as a mechanism to capitalise on seasonally abundant food sources. Based on the stomach content analysis, invertebrates were consumed as frequently as mammalian prey throughout the year but mammalian prey was recorded in greater quantity (i.e. volume and mass). Thus, scat analysis may have overestimated mammalian prey and fruits and underestimated the importance of invertebrates, particularly highly digestible species (e.g. termites). In spite of these differences, scat analysis demonstrated similar general and seasonal trends as the stomach content analysis. Thus, scat analysis can provide an efficient and relatively accurate source of information on the diet of blackbacked jackals in the Eastern Cape. Both stomach content and scat collection methods depicted the black-backed jackal as a generalist and opportunistic predator, mainly relying on mammals and invertebrates. Although the results of my study suggest that black-backed jackal may be important predators of certain ungulate species, further study on their prey preferences, actual biomass ingested and the effects on the population viability of prey species is required in order to develop a robust management plan for the species in the protected areas of the Eastern Cape.