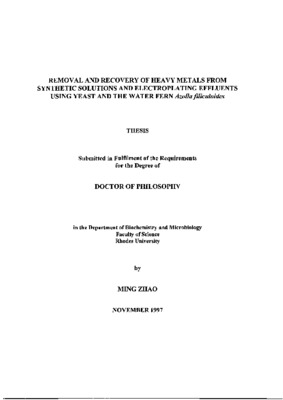 The aims of the project were twofold. The initial objective of the study, based on previous results, was to develop an economically viable methodology for immobilizing yeast cells for the treatment of heavy metal-laden waste water. The non-viable yeast cross-linked by 13% (w/v) formaldehyde/1N HNO₃ exhibited satisfactory mechanical strength and rigidity in a continuous-flow column operation. No apparent disruption of the biomass after repeated use was observed. The cost of immobilizing 1kg dry yeast pellets was estimated at less than US$I. Zn uptake capacity of FA-cross-linked pellets, on batch trials, remained similar to that of raw yeast, reflecting that the immobilizing procedure did not hinder its metal removing capacity. In column studies, cation metals were effectively removed by the yeast pellets from aqueous solution at natural pHs, and then recovered completely by washing the pellets in situ with O.1M HCl. The recovered metals were concentrated in such small volumes that recycling or precipitation of them was facilitated. The metal uptake capacity of the regenerated biomass remained constant in comparison with cycle 1, indicating that reuse of the yeast would be possible. In the case of Cr⁶⁺, a gradual breakthrough curve of Cr in the column profile was noted, with a simultaneous reduction of Cr⁶⁺ to Cr³⁺. However, Cr⁶⁺ in the effluent can be markedly minimised either by accumulation onto the biomass or reduction to its trivalent form. Desorption of bound Cr⁶⁺ with either alkali or salt could not accomplish the regeneration of the biomass. A combination of reduction and desorption with FA/HNO₃ appeared promising in regeneration of the saturated biomass at 4°C. The metal sorption capacities of the yeast pellets, on a batch or a fixed-bed system are relatively lower than that of documented sorbents. Apparently more of the yeast pellets would be required for treating a certain volume of waste effluent, than with other sorbents. Therefore Azolla filiculoides was examined as a suitable sorbent for this purpose. This constitutes the second part of the project. Azolla filiculoides, a naturally-abundant water fern, was screened for its metal sorption and recovering capacities, mechanical stability, flow-permeability and reusability. The azolla biomass appeared to have fulfilled the required mechanical criteria during the repeated sorption-desorption column operations. It is water-insoluble and appears flexible under pressure when rinsed with water. These characters are of crucial importance in a continuous-flow system since a column can be operated at high flow rates without apparent compact of the biomass and pressure loss. Therefore, immobilization of the biomass can be avoided. The sorption isotherm data, obtained from batch removal of Cr⁶⁺, showed that the sorption process was effective, endothermic and highly pH dependent. Considerable amounts of Cr⁶⁺ were accumulated at the optimum pHs of 2-2.5. Column sorption of Cr⁶⁺ at a low flow rate and pH of 2.5 showed optimum performance with a total Cr uptake of 50.4mg/g at 60% saturation of the biomass. Removal of Cr⁶⁺ from an electroplating effluent using an azolla column was deemed reasonably satisfactory, although the uptake declined slightly. Desorption of bound Cr⁶⁺ with various desorbents was incomplete, which resulted in a low regeneration efficiency of about 50%. However, removal and recovery of Cr³⁺ using the azolla column was than that of Cr⁶⁺. Desorption of Cr³⁺ from the spent biomass column was accomplished with the recovery of 80% using O.5N H₂SO₄, The regeneration efficiencies for Cr³⁺ removal were up to 90% and demonstrated that the biomass is reusable. Cation metal uptake capacities of azolla, obtained either from batch or column experiments, are reasonably high in comparison with other sorbents. The uptake of Ni or Zn ions from solution is pH dependent showing the optimum pH of around 6 to 6.5, under the current experimental conditions. The sorption kinetics for cation metals was rapid with about 80% of the bound Ni ions being taken up in the first 10 min. The character of rapid binding is extremely important in a column sorption process, especially on a large scale since it favours an optimum uptake of metals at high flow rates. The Ni or Zn uptakes in column sorption were not markedly affected when the flow rates were increased from 80mllh up to 800ml/h for the 5g biomass used. The cation heavy metals removed from waste effluents were recovered in a concentrated solution of small volume. The desorption of bound Ni and Zn ions from the saturated biomass was accomplished with either O.2N HCl or H₂SO₄ that resulted in recoveries of more than 95%. The metals recovered, in the case of Ni and Zn, are identical to that of plating agents ego nickel sulphate or chloride, so that recycling of the metals is possible. An effluent-free, closed loop of Ni or Zn treatment system was proposed, whereby the Ni or Zn ions can be recycled to the plating bath whilst the purified water is fed back to the rinse tanks. Ca and Mg ions, commonly present in the electroplating effluents, appeared to affect sorption of heavy metals by azolla when metal concentrations were relatively low, presumedly through its competitive binding for the shared sites on surfaces of azolla. The data obtained from column sorption of Ni and Zn follows the BDST model well, enabling the application of the model to predicting design parameters for scale-up of the biosorption column system. It is interesting that the values of metal uptake, expressed in molar quantities, obtained on respective single-metal solutions and the multiple metal system, are similar, implying that the mechanisms involved in the sorption of all metal cations are similar and that the binding sites on surfaces of azolla are probably shared by all cation metals. The surface of the biomass provides sites for metal binding estimated in the range of 0.45-0.57mmol/g, based on the current experiments. The biomass has a surface area of 429 m²/g and water retention of 14.3 ml/g. The functional groups on the surface of azolla were partially identified using chemical modification and metal binding comparison. Among the functional groups examined, carboxyl groups, provided by amino acids and polysaccharides, appeared to play an important role in metal cation binding. The infrared spectra of the samples support this conclusion.