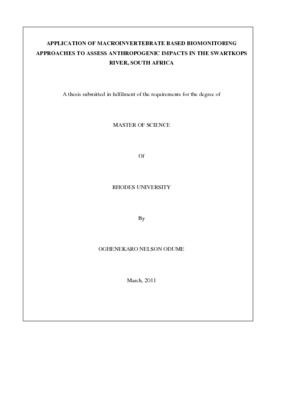 Application of macroinvertebrate based biomonitoring approaches to assess anthropogenic impacts in the Swartkops River, South Africa

A growing human population accompanied by urbanisation and industrialisation have led to over exploitation and pollution of freshwater resources and have consequently impacted on aquatic ecosystem health. The Swartkops River in the Eastern Cape of South Africa is no exception. It drains a heavily industrialised catchment which has led to deterioration of its water quality due to pollution. Integrated water resources management (IWRM) requires the concurrent sustainable use of water resources and the protection of aquatic ecosystem health. Macroinvertebrates are well known for their ability to reflect the health of the environment in which they live, thus they were used to assess anthropogenic impacts in the Swartkops River for this study. Macroinvertebrate based biomonitoring approaches, including the South African Scoring System version 5 (SASS5); a multimetric approach involving 19 metrics; Chironomidae community assessments and screening of morphological deformities in Chironomidae larvae, were applied at four selected sampling sites to assess environmental water quality in the Swartkops River. Macroinvertebrates were sampled using the SASS5 protocols. Chironomidae were mounted and identified as far as practically possible using available keys. Mentum, ligula, mandible, paraligula and antenna in Chironomidae larvae were screened for deformities. Physical and chemical water quality variables were measured at each of the selected sampling sites. All data were subjected to relevant statistical analyses. Of the four sites sampled during the study period, results revealed that water quality at site 1 was the least impacted with highest SASS5 scores, average score per taxa (ASPT) values, richness, diversity, equitability and Ephemeroptera –Plecoptera-Trichoptera (EPT) richness, as well as least incidences of chironomid deformities. Water quality at site 2 was considered the next least impacted with higher SASS5 scores, ASPT values, richness, diversity and equitability, and lower incidences of deformities compared to sites 3 and 4. SASS5 scores and ASPT values revealed that both sites 3 and 4 were critically modified but the multimetric analysis, Chironomidae community assessment and incidences of deformities in Chironomidae larvae indicated that site 3 is the most impacted of the four sampling sites, with least species diversity, richness, equitability and highest incidences of deformities. The study revealed the importance of multicriteria apporoach to environmental biomonitoring as an integrated water resources management tool, and based on the results, site 3, as the most impacted, could be prioritised for restoration intervention.