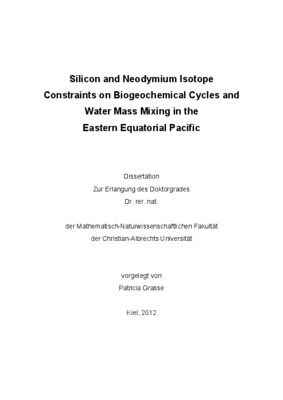 By Patricia Grasse
Get PDF (8 MB)

Stable and radiogenic isotope systems are powerful tools to investigate biogeochemical processes, nutrient cycling and water mass mixing in the ocean. Here a comprehensive study of the stable isotopes of silicon (Si) and the radiogenic isotope composition of the Rare Earth Element (REE) neodymium (Nd) is presented for the Eastern Equatorial Pacific (EEP), where one of the globally largest Oxygen Minimum Zones (OMZs) is located. The two isotope systems are used to investigate biogeochemical cycling and water mass mixing processes, which are the key factors controlling the oxygen content and the extent of the OMZ