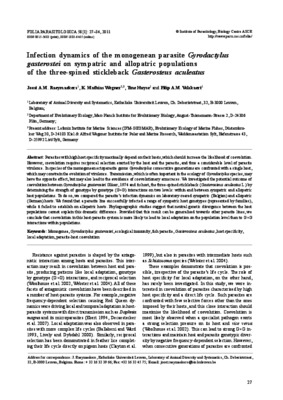 Parasites with high host specificity maximally depend on their hosts, which should increase the likelihood of coevolution. However, coevolution requires reciprocal selection exerted by the host and the parasite, and thus a considerable level of parasite virulence. In species of the monogenean ectoparasite genus Gyrodactylus consecutive generations are confronted with a single host, which may constrain the evolution of virulence. Transmission, which is often important in the ecology of Gyrodactylus species, may have the opposite effect, but may also lead to the avoidance of coevolutionary arms races. We investigated the potential outcome of coevolution between Gyrodactylus gasterostei Glaser, 1974 and its host, the three-spined stickleback (Gasterosteus aculeatus L.) by determining the strength of genotype by genotype (GxG) interactions on two levels: within and between sympatric and allopatric host populations. To do so, we compared the parasite's infection dynamics on laboratory-reared sympatric (Belgian) and allopatric (German) hosts. We found that a parasite line successfully infected a range of sympatric host genotypes (represented by families), while it failed to establish on allopatric hosts. Phylogeographic studies suggest that neutral genetic divergence between the host populations cannot explain this dramatic difference. Provided that this result can be generalised towards other parasite lines, we conclude that coevolution in this host-parasite system is more likely to lead to local adaptation on the population level than to GxG interactions within populations