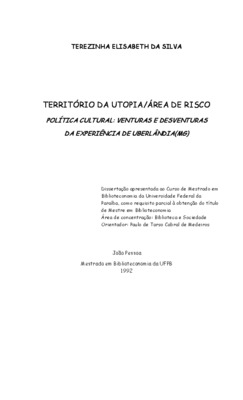 This dissertation discusses the administration of culture by public institutions and the conflicts inherent to the relation between culture and power mediated by ntellectuals in public office. It presents an historical frame of reference for the relation between culture and power in Brazil from the beginning of the Republic to the l980's when the military dictatorship underwent a process of political democratization. It sets out the visions of several authors concerning cultural policy and its treatment in different periods and countries, emphasizing the specific Brazilian case. In it we test a series of theoretical references with respect to conceptions of culture, the intellectual and the State. We then describe the history and structure of the object of the case study - the Municipal Secretariat of Culture in Uberlândia(MG). Questions related to the methods and techniques employed are also discussed. The statements which were collected were interpreted using such categories of analyses as culture versus bureaucracy, political populism, paternalism, power, the role of the cultural agent, the processural focus of culture, and the limits and weaknesses of the practice under study. The questions identified in the case of Uberlândia are related to other experiences which took place during the same period. We conclude by verifying that cultural policies practised on a large scale in this country in the 1980's we faced, at the end of the decade, with archaic forms of power where there was apparently no place for experiences whose aim was social change and the democratization of culture