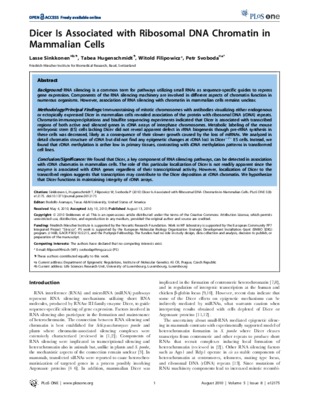 Dicer is associated with ribosomal DNA chromatin in mammalian cells

BACKGROUND: RNA silencing is a common term for pathways utilizing small RNAs as sequence-specific guides to repress gene expression. Components of the RNA silencing machinery are involved in different aspects of chromatin function in numerous organisms. However, association of RNA silencing with chromatin in mammalian cells remains unclear. METHODOLOGY/PRINCIPAL FINDINGS: Immunostaining of mitotic chromosomes with antibodies visualizing either endogenous or ectopically expressed Dicer in mammalian cells revealed association of the protein with ribosomal DNA (rDNA) repeats. Chromatin immunoprecipitations and bisulfite sequencing experiments indicated that Dicer is associated with transcribed regions of both active and silenced genes in rDNA arrays of interphase chromosomes. Metabolic labeling of the mouse embryonic stem (ES) cells lacking Dicer did not reveal apparent defect in rRNA biogenesis though pre-rRNA synthesis in these cells was decreased, likely as a consequence of their slower growth caused by the loss of miRNAs. We analyzed in detail chromatin structure of rDNA but did not find any epigenetic changes at rDNA loci in Dicer(-/-) ES cells. Instead, we found that rDNA methylation is rather low in primary tissues, contrasting with rDNA methylation patterns in transformed cell lines. CONCLUSION/SIGNIFICANCE: We found that Dicer, a key component of RNA silencing pathways, can be detected in association with rDNA chromatin in mammalian cells. The role of this particular localization of Dicer is not readily apparent since the enzyme is associated with rDNA genes regardless of their transcriptional activity. However, localization of Dicer to the transcribed region suggests that transcription may contribute to the Dicer deposition at rDNA chromatin. We hypothesize that Dicer functions in maintaining integrity of rDNA arrays