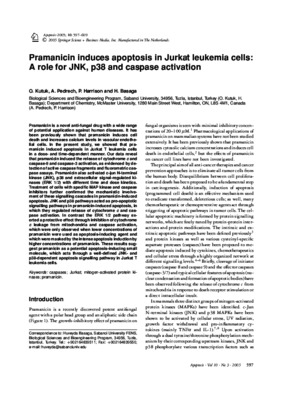 Pramanicin is a novel anti-fungal drug with a wide range of potential application against human diseases. It has been previously shown that pramanicin induces cell death and increases calcium levels in vascular endothelial cells. In the present study, we showed that pramanicin induced apoptosis in Jurkat T leukemia cells in a dose- and time-dependent manner. Our data reveal that pramanicin induced the release of cytochrome c and caspase-9 and caspase-3 activation, as evidenced by detection of active caspase fragments and fluorometric caspase assays. Pramanicin also activated c-jun N-terminal kinase (JNK), p38 and extracellular signal-regulated kinases (ERK 1/2) with different time and dose kinetics. Treatment of cells with specific MAP kinase and caspase inhibitors further confirmed the mechanistic involvement of these signalling cascades in pramanicin-induced apoptosis. JNK and p38 pathways acted as pro-apoptotic signalling pathways in pramanicin-induced apoptosis, in which they regulated release of cytochrome c and caspase activation. In contrast the ERK 1/2 pathway exerted a protective effect through inhibition of cytochrome c leakage from mitochondria and caspase activation, which were only observed when lower concentrations of pramanicin were used as apoptosis-inducing agent and which were masked by the intense apoptosis induction by higher concentrations of pramanicin. These results suggest pramanicin as a potential apoptosis-inducing small molecule, which acts through a well-defined JNK- and p38-dependent apoptosis signalling pathway in Jurkat T leukemia cells