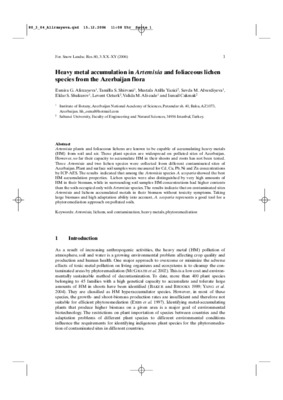 Artemisia plants and foliaceous lichens are known to be capable of accumulating heavy metals (HM) from soil and air. These plant species are widespread on polluted sites of Azerbaijan. However, so far their capacity to accumulate HM in their shoots and roots has not been tested. Three Artemisia and two lichen species were collected from different contaminated sites of Azerbaijan. Plant and surface soil samples were measured for Cd, Cu, Pb, Ni and Zn concentrations by ICP-AES.The results indicated that among the Artemisia species A. scoparia showed the best HM accumulation properties. Lichen species were also distinguished by very high amounts of HM in their biomass, while in surrounding soil samples HM concentrations had higher contents than the soils occupied only with Artemisia species.The results indicate that on contaminated sites Artemisia and lichens accumulated metals in their biomass without toxicity symptoms. Taking large biomass and high adaptation ability into account, A. scoparia represents a good tool for a phytoremediation approach on polluted soils