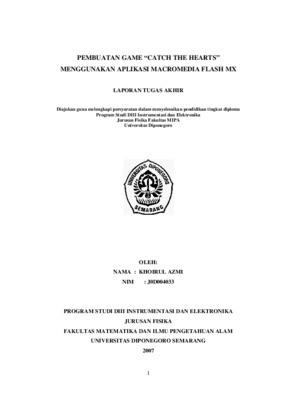 The Making of game âCatch the heartsâ with Macromedia Flash MX has been realized. Game Catch the hearts represent type of game catch and dodge an object. In this game there are cowok as especial character which can be moved by using keyboard and mouse to catch the red heart that thrown by angel and dodge the black heart that thrown by devil, others also have to dodge rundevil that will run and bump cowok. When cowok catch the red heart, hence will add score marked with big heart appearance and if cowok catch the black heart or bump rundevil hence the cowok energy barâs will be decreased. This game only 60 second, if in less than 60 second cowok has filled full the big heart, cowok win the game. On otherwise if in more than 60 second or the bar of energy of cowok have last and cowok hasnât able to fill full the big heart, the game will be over. This game has 3 level, level 1, level 2, and level 3