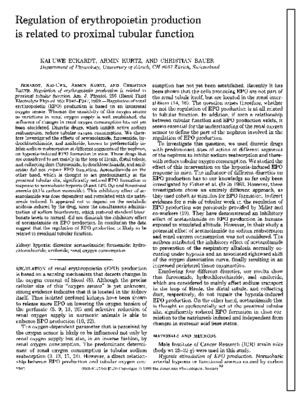 Regulation of erythropoietin production is related to proximal tubular function

Regulation of renal erythropoietin (EPO) production is based on an intrarenal oxygen sensor. Whereas the sensitivity of this oxygen sensor to variations in renal oxygen supply is well established, the influence of changes in renal oxygen consumption has not yet been elucidated. Diuretic drugs, which inhibit active sodium reabsorption, reduce tubular oxygen consumption. We therefore investigated the effects of acetazolamide, furosemide, hydrochlorothiazide, and amiloride, known to preferentially inhibit sodium reabsorption at different segments of the nephron, on hypoxia-induced EPO formation in mice. Those drugs that are considered to act mainly in the loop of Henle, distal tubule, and collecting duct (furosemide, hydrochlorothiazide, and amiloride) did not impair EPO formation. Acetazolamide on the other hand, which is thought to act predominantly at the proximal tubular site, significantly reduced EPO formation in response to normobaric hypoxia (8 and 14% O2) and functional anemia (0.1% carbon monoxide). This inhibitory effect of acetazolamide was dose dependent and correlated with the natriuresis induced. It appeared not to depend on the metabolic acidosis induced by the drug, since the simultaneous administration of sodium bicarbonate, which restored standard bicarbonate levels to normal, did not diminish the inhibitory effect of acetazolamide on EPO production. In conclusion the data suggest that the regulation of EPO production is likely to be related to proximal tubular function