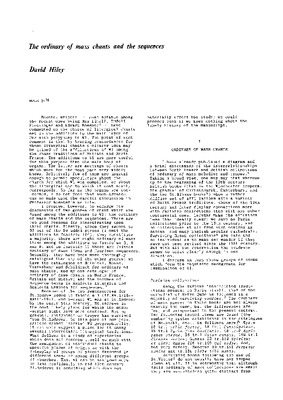 The ordinary of mass chants and the sequences

Several writers – most notable among the recent ones being Max Lütolf, Rudolf Flotzinger and Edward Roesner – have commented on the choice of liturgical chants set in the additions to the main layer of Parisian polyphony in W1. The point of such comment is that by tracing concordances for those liturgical chants a clearer idea may be gained of the affiliations of W1 among the chant traditions of Britain and North France. The additions to W1 are more useful for this purpose than the main body of organa. The latter are settings of chants which were for the most part very widely known. Relatively few of them are unusual enough to permit speculation about the church for which W1 was compiled, or about the liturgical use to which it most nearly corresponds. So far as the organa are concerned, I do not feel that much advance can be made upon the careful discussion in Professor Roesner's article