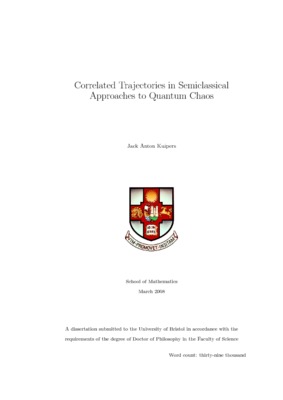 By Jack Kuipers
Get PDF (1 MB)

This thesis is concerned with the application and extension of semiclassical methods, involving correlated trajectories, that were recently developed to explain the observed universal statistics of classically chaotic quantum systems. First we consider systems that depend on an external parameter that does not change the symmetry of the system. We study correlations between the spectra at different values of the parameter, a scaled distance $x$ apart, via the parametric spectral form factor $K(\tau,x)$. Using a semiclassical periodic orbit expansion, we obtain a small $\tau$ expansion that agrees with random matrix theory for systems with and without time reversal symmetry. Then we consider correlations of the Wigner time delay in open systems. We study a form factor $K(\tau,x,y,M)$ that depends on the number of scattering channels $M$, the non-symmetry breaking parameter difference $x$ and also a symmetry breaking parameter $y$. The Wigner time delay can be expressed semiclassically in terms of the trapped periodic orbits of the system, and using a periodic orbit expansion we obtain several terms in the small $\tau$ expansion of the form factor that are identical to those calculated from random matrix theory. The Wigner time delay can also be expressed in terms of scattering trajectories that enter and leave the system. Starting from this picture, we derive all terms in the periodic orbit formula and therefore show how the two pictures of the time delay are related on a semiclassical level. A new type of trajectory correlation is derived which recreates the terms from the trapped periodic orbits. This involves two trajectories approaching the same trapped periodic orbit closely - one trajectory approaches the orbit and follows it for several traversals, while its partner approaches in almost the same way but follows the periodic orbit an additional number of times