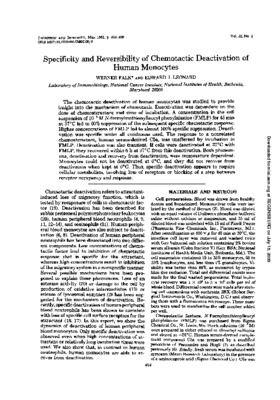 Specificity and reversibility of chemotactic deactivation of human monocytes

The chemotactic deactivation of human monocytes was studied to provide insight into the mechanism of chemotaxis. Deactivation was dependent on the dose of chemoattractant and time of incubation. A concentration in the cell suspension of 10(-8) M N-formylmethionylleucyl phenylalanine (FMLP) for 45 min at 37 degrees C led to 60% suppression of the subsequent specific chemotactic response. Higher concentrations of FMLP led to almost 100% specific suppression. Deactivation was specific under all conditions used. The response to a nonrelated chemoattractant, human serum-derived C5a, was unaffected by incubation in FMLP. Deactivation was also transient. If cells were deactivated at 37 degrees C with FMLP, they recovered within 6 h at 37 degrees C from this deactivation. Both phenomena, deactivation and recovery from deactivation, were temperature dependent. Monocytes could not be deactivated at 0 degrees C, and they did not recover from deactivation when kept at 0 degrees C. Thus, specific deactivation appears to require cellular metabolism, involving loss of receptors or blocking of a step between receptor occupancy and response