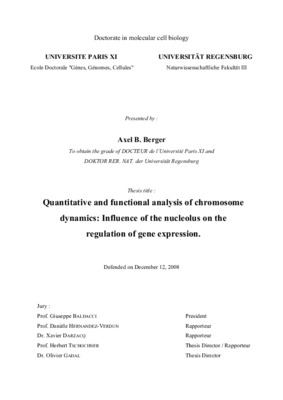 Quantitative and functional analysis of chromosome dynamics: Influence of the nucleolus on the regulation of gene expression

Chromatin is distributed non-randomly within the cell nucleus. Its spatial organization has been demonstrated to be important for nuclear metabolism such as, DNA replication, reparation or transcription. However, little is known about the functional implications resulting from its organization or the molecular driving forces responsible for chromatin organization. In the course of this thesis, I studied the budding yeast HMG-box protein Hmo1. An initial screen demonstrated that this chromatin-associated protein is genetically linked to the RNA polymerase (Pol) I, to genes coding for ribosomal proteins (RPGs) as well as to genes implicated in stress response. I could show that Hmo1 physically interacts with the rRNA coding gene transcribed by Pol I and with a subset of RPG promoters. Global expression analyses showed a clear dependence on Hmo1 for the expression of a sub-set of RPGs. An hmo1 deletion strain is also largely alleviated in repressing RPG transcription after TOR complex 1 inhibition. These results suggested that Hmo1 is implicated in Pol I transcription as well as RPG regulation. Preliminary in vitro transcription assays suggest a role of Hmo1 in Pol I initiation and elongation events. Since Hmo1 is a bona fide nucleolar factor, I wanted to test the hypothesis if Pol II transcribed RPGs associated with Hmo1 are localized in the proximity of the nucleolus, as previously reported for Pol III encoded tRNA genes. Due to the small size of the yeast nucleus and the stochastic, sub-diffusive movement of DNA, we first needed to develop a new method allowing determination of gene localization probabilities with very high accuracy and with respect to the nucleolus. As a result of this collaborative approach, we could demonstrate by analyzing thousands of cells, that genes are confined into sub-nuclear volumes. These �gene territories� show a locus specific size and can be remodeled upon transcriptional activation. Applying this new method to Pol II transcribed genes required for ribosome biogenesis, such as the RPGs, indicates that the localization of the gene on the chromatin fiber has important implications for its three dimensional positioning. Genes in proximity to the centromere localize in front of the spindle pole body while RPGs further away from the extremities of the chromosome arm can also occupy a nucleolar-close territory. Furthermore, it also seems that neighboring genes are important positioning determinants. All together, these results show that Hmo1 participates in mediating Pol I and RPG transcription regulation in response to growth conditions and that this important cross-talk between different RNA polymerases could be mediated by spatial co-positioning of the genes. Further analyses will be required to reveal the potential function of Hmo1 in this interplay