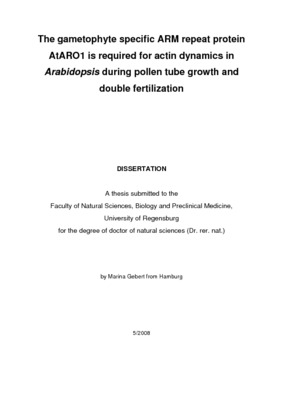 By Marina Gebert
Get PDF (8 MB)

The aim of this work was to identify the function of an ARM repeat protein encoding gene from Arabidopsis, whose homologous gene from wheat (Triticum aestivum) was found to be specifically expressed in egg cells and anthers. In the model plant Arabidopsis thaliana four proteins with similarity to the putative wheat ARM repeat protein were identified, and further putative homologues were found in several other plant species. The proteins revealed no other known protein motifs in addition to the ARM repeats, and were thus named as Armadillo repeat only (ARO) proteins. All AtARO and ARO-like proteins showed a conserved overall structure, mainly comprising two ARM repeat containing domains (ARD1, ARD2) and contain putative conserved phosphorylation sites. Expression studies via RT-PCR and QRT-PCR, evaluation of microarray data and promoter-reporter gene studies in transgenic plants revealed that AtARO1 is specifically expressed in the mature egg cell, mature pollen grains and germinating pollen tubes. In contrast, the other members of the family (AtARO2-AtARO4) were found to be expressed more ubiquitously, including egg cells. However, their transcripts are absent in pollen. The function of AtARO1 was analyzed using three different T-DNA insertion lines (aro1-1 and aro1-2 in the potential promoter, aro1-3 at the end of ARD1) by searching for aberrant phenotypes. Further, AtARO1 was specifically knocked-down in egg cells using an egg cell specific promoter and the RNAi approach. The female gametophyte did not show any alterations upon downregulation through RNAi or in aro1-3 T-DNA insertion lines and was able to transmit the aro1-3 allel. This effect can be explained by a functional redundancy of the AtARO protein family and complementation of AtARO1 in the egg cell. A core promoter element for cell-specific expression of AtARO1 could be restricted to -327 bp from the start codon as insertion lines aro1-1 and aro1-2 did not show any phenotype. Further analysis of the aro1-3 pollen tube morphology revealed depolarized, short and plump pollen tubes, which could be attributed to a severe disorganization of the actin cytoskeleton. An AtARO1-GFP fusion protein expressed under the control of the endogenous AtARO1 promoter was found to be localized in the pollen tubes´ cytoplasm where it co-localizes with the actin cytoskeleton, in the vegetative nucleus and to accumulate at the pollen tube tip. It was completely absent in sperm cells. The fusion protein is functional in planta, as it could complement the aro1-3 phenotype. As AtARO1-GFP was only detected in the cytoplasm of egg cells but not in the nucleus, it might be actively excluded from the nucleus in egg cells. A potential function of AtARO1 in the growing pollen tube tip can be assumed as AtARO1-GFP accumulates in the apex, as this accumulation appears to oscillate, and as tip localized AtARO1-GFP was found to reorient towards the future site of tip growth upon a directional change of the pollen tubes growth track. The co-localization of AtARO1-GFP and actin was further established by treatments of AtARO1-GFP expressing pollen tubes with the F-actin disrupting drug LatB, which abolished both, the actin bundles and the filamentous distribution of AtARO1 in the shank of the pollen tube. The apical accumulation of AtARO1 was only affected to a minor extend, implicating that actin might aid in restricting AtARO1 to the tube tip. Upon treatment with the exocytotic inhibitor BFA, the distribution of AtARO1-GFP changed dramatically into accumulations of strong fluorescent bodies throughout the shank, and a complete evanescence of AtARO1-GFP from the tip. From these results it can be concluded that the accumulation of AtARO1 in the tube tip is dependent on exocytosis, and that AtARO1 not only is important to establish polar orientated F-actin bundles necessary for polar tip growth, but might participate in the highly active and polarized secretory machinery of growing pollen tubes. The localization of AtARO1-GFP in the female gametophyte upon pollen tube arrival revealed that pollen-derived AtARO1 co-localizes with a narrow F-actin band in the degenerating synergid of Arabidopsis. It is known that the sperm cells, released from the pollen tube into the receptive synergid, migrate along emerging actin coronas towards their sites of fusion, the egg and central cell. The present results indicate that AtARO1 might be involved in establishing F-actin structures necessary for sperm cell migration. But the role of AtARO1 in the egg cell before or during fertilization needs to be elucidated in future studies. To reveal the precise function of AtARO1 in the egg cell and pollen tube, the identification of interaction partners is essential. As conventional yeast two hybrid assays did not lead to any results, other approaches, taking in account the possibility of membrane bound interaction partners of AtARO1, might give valuable hints on AtARO1 function in the future